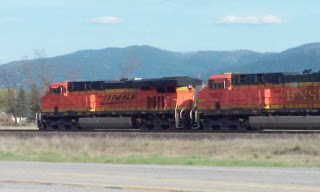 A growing number of area residents are asking for railroad quiet zones in Spokane Valley and Cheney. According to the Spokesman-Review, these horn-free zones can be established if communities invest in extra safety measures at railroad crossings. Without the added measures, federal law requires trains to sound their horns at between 96 to 110 decibels as they approach at-grade crossings and continue to do so until the train clears the intersection.

In areas where there are multiple crossings in a short distance, such as between Barker Road and Evergreen Road, this can mean a lot of honking for people living near there, especialy with up to 70 trains passing through the area daily.

In the past, Spokane Valley and Cheney residents have lobbied elected officials for quiet zones, but failed due to the cost of safety equipment that has to be installed which can run to several hundred thousand dollars per crossing.

In 2011, Spokane Valley residents asked for a quiet zone but the City of Spokane Valley Council didn’t want to pay for an engineering study, despite having 38 rail crossings where trains blow their horns. Mayor Rod Higgins says it would take more than one or two quiet zones to make a difference in noise levels.

Four years ago, an engineering study estimated the cost of creating a quiet zone through Cheney at more than $1 million. That wasn’t an option at the time so the cause was abandoned. Now Cheney Mayor Tom Trulove (an SRTC Board member) wants recommendations from the Federal Railroad Administration on additional safety measures to install at Cheney’s crossings. If the horns cease, Trulove wants assurance that pedestrians and vehicles aren’t at higher risk for getting hit by trains.

In Vancouver, Washington, citizens got a quiet zone by paying for safety upgrades themselves.
Homeowners living closest to the tracks pay $150 per year through a local improvement district. People who live farther from the tracks pay $45 per year. Those payments will continue for 20 years.