Are Spokane’s Bridges Going To Collapse? Not Likely. Do They Need Work. Yes, Just Like Most Bridges In America 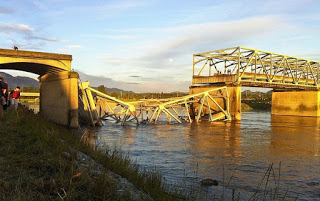 In light of the I5 bridge collapse in Skagit County last night, here are some facts about Spokane Co. bridges.

We want to stress that we’re not trying to alarm anyone and there is very little chance any of our bridges are going to fall down, but the fact remains that maintenance is a necessity and the funds to do it are very limited. What I’m getting at is that an alternative source to fund transportation maintenance is needed ASAP. Will that mean we have to quit building new roads or adding lanes to existing roads to pay for upkeep instead? It’s a very real possibility. The state has shifted to a “fix it first” mentality, meaning the priority is now on maintenance rather than new construction.