Amtrak Back To Normal Schedule Starting In January 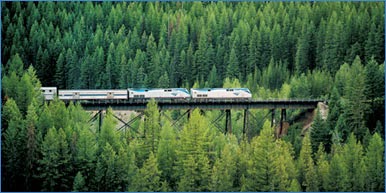 A while back, I posted an article on how Amtrak trains have been regularly running late because
they’re getting bumped from the tracks by an increase in other kinds of trains. Because Amtrak contracts with the railroads for rail space, they kind of have to take what they can get, when they can get it.

Today, I was forwarded a news release from Amtrak that says they will resume operating the passenger train Empire Builder on it’s regular schedule starting January 12 and that Burlington Norther-Santa Fee is doing $1 billion in construction that will add capacity on the tracks and improve future service for all trains using the rails. The release also says BNSF is committed to work to improve the performance of the Empire Builder from here on out. Ok, so we’ll see how that goes.

If you’re willing to give it a try, here’s the link where you can check out Amtrak routes and buy tickets.