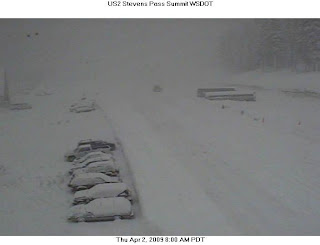 ‘Spring’ snow is making a mess of local roads this morning. Rollovers and slide-offs are being reported all over the Spokane and Coeur d’Alene areas.

Stevens (shown in the picture) and Snoqualie passes were both closed overnight, but open again this morning. Crews on Stevens had to clean up after an avalanche that hit a car but didn’t hurt anyone and Snoqualmie was closed for avalanche control. Traction tires are advised on both passes if you’re heading that way today or tomorrow. No studs though, as of Monday they’re illegal until next year.