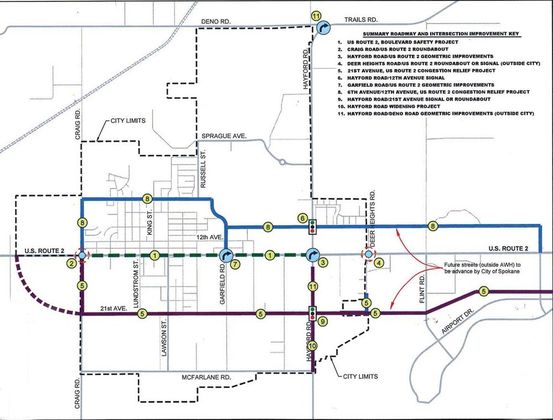 According to officials on the West Plains, Airway Heights is one of the most rapidly growing cities in eastern Washington. The population grew by nearly 239 percent between 1990 and 2015, an annual growth rate of 5 percent. It has since settled into a consistent 2 percent annual growth rate but city officials are preparing for that growth. According to the Cheney Free Press, a transportation circulation plan (TCP) for Airway Heights is expected to be approved by the Airway Heights City Council this month.

The plan includes 11 projects, with two of the main ones on Highway 2 at Craig and Hayford roads. The Craig Road intersection is slated to be a roundabout, with one at Deer Heights Road and Highway 2 in the future as well. Other projects include widening Craig and Hayford roads, congestion relief at 21st Ave. and Highway 2, and a signal at the intersection of Hayford and 12th.

The next step in the plan is to come up with a traffic impact fee to pay for these improvements. The public works department will work with the council to hopefully get it in place by the end of 2018.