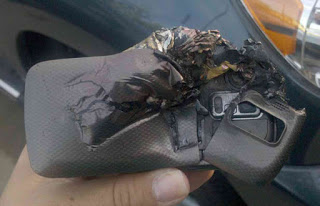 Some airlines are taking steps in case a device powered by a lithium ion battery catches fire during flight.
According to Yahoo! Finance, at least three U.S. airlines are adding fire-suppression equipment to fleets in case a cellphone or laptop battery overheats and catches on fire.
There have been several incidents of overheating Samsung Galaxy Note 7 phones, including one on a Southwest Airlines flight a few weeks ago.
The Federal Aviation Administration is warning passengers not to use or charge the devices while on board or put them in checked luggage.
Alaska Airlines installed fire-containment bags on its entire fleet in May. The bags are made of a fire-resistant material and can be shut with Velcro and heavy-duty zippers that can withstand temperatures up to 3,200 degrees Fahrenheit. The sell for $1,800 each but airlines are likely to have negotiated a bulk discount.
Virgin America has also installed the bags on all of its’ planes. Delta Air Lines says it will also be adding the bags soon.
American Airlines, JetBlue Airways, Southwest Airlines and United Airlines don’t have any immediate plans for fire containment bags.