A Non-Scientific Look at Bike Security In Portland 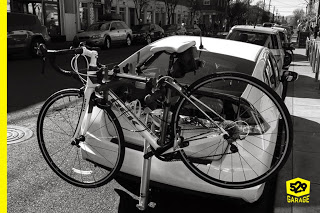 As I posted yesterday, the City of Spokane is starting a new online registration process to unite stolen
bikes with their rightful owners. Spokane Police say they recover many bikes each year, but they usually are never claimed. Many bikes are stolen out of people’s yards or even their garages (happened to one of our Transportation Planners) but others are actually taken when they’re locked up in a public place.

This is especially common in larger cities. In the northwest, Portland reports it happens a lot. One of the bloggers at 529 garage was curious about bike theft and related information, such as how well people lock up their bikes, what kind of locks they’re using, the brands and worth of the bikes people are riding and how many accessories such as helmets and bike lights people are leaving on their bikes when they lock them up and head into a restaurant, store or other business.

Some of the findings of this unscientific survey were surprising- such as that a large number of bikes in Portland have no identifying marks, stickers or logos on them as to what brand they are. And that a lot of people don’t lock their bikes when they are hauling them on a rack on a car and park for an extended amount of time to go into a business.

Some weren’t as surprising as you’d wish. Such as that, while a lot of people are using good quality locks, many are still locking their bikes up in a way that they could still easily be stolen in just a few seconds by taking off the quick-release saddle.

It’s an interesting article and there’s a lot of information here so check out the post by clicking here.