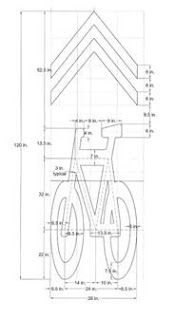 With the passage of the City of Spokane’s new Master Bike Plan, along with new interest in cycling in our community, the City is adding “sharrows” on Southeast Blvd. and 37th Ave. as part of this summer’s construction work to allow bikes and cars to get along better.

Sharrows are pavement markings installed within travel lanes designed to alert motorists that they are sharing the street with bicyclists and to help bicyclists position themselves in lanes to allow motorists to safely pass them.

These markings have been used successfully in other cities across the country, including Seattle, Bellevue, and Portland. In Spokane, the new markings will be unveiled when Southeast Blvd. and 37th Ave. reopen to traffic. Southeast Blvd. opens later this month, with 37th Ave. to follow mid-October, and other streets in the future.

On the Southeast Blvd., which is being rehabilitated from 29th Ave. to Perry St., the sharrows will be placed between 27th and 29th avenues connecting the existing dedicated bike lanes on the street. On 37th Ave., which is being rehabilitated from Perry to Regal streets, the installation of the sharrows, placed the length of the project, will improve bicycle safety and usage along this corridor.

To use a sharrow:

· Use the sharrow to guide where you ride within the lane – generally through the center of the sharrow when safe to do so.
· Remember not to ride too close to parked cars – watch for opening doors.
· Ride in the same direction as traffic.
· Be aware of your surroundings, and follow the rules of the road.

· Expect to see bicyclists in the travel lane.
· Pass to the left of the cyclist, using the adjacent travel lane. Remain behind the cyclist until it is safe to pass.
· Yield to on-coming bicyclists when turning and look right/behind you when making a right-hand turn.
· Be aware of your surroundings, and follow the rules of the road.