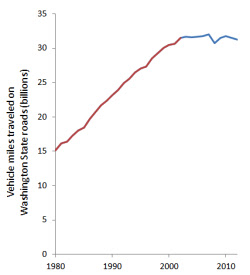 Vehicle travel on Washington state roads fell again last year. While it was a modest decline, it shows that the trend of driving less has gone on for an entire decade now.

In fact, the Washington State Department of Transportation believes total traffic on state roads was slightly lower in 2012 than it was in 2002.

Sightline Daily has the numbers and some possible contributing factors.